Gratefulness wrapped up in a package of times together. Take the time to pay attention, an attempt to really see, to listen, to be all present with them all.

On a Treasure Hunt

This next group from my gratefulness list has a theme of exploration - on a treasure hunt. Looking for and finding adventure in the simple, everyday things.

This gratefulness list is an ongoing project. Set aside, sometimes, but temporarily. Picked up again. Continuing on. Some days, I have to scratch and dig to find something, like a hen searching for seeds, clawing at frozen soil. Those are the days I need to do this the most. That tiny seed, clawed for and found, nourishes my heart and grows in my mind to redirect my thoughts from burdened overload to a light-hearted perspective. Which I need.

The lists in the tabs above are numbered. Now, I don't number. And, I try to think of the whys. Taking the list to the next level of why I am grateful for something. What about that person/item/situation sparks gratefulness in my heart?

My goal, here, is to update this list about once a week. Perhaps, as you browse through, you will find a spark toward gratefulness in your heart, also.

Posted by Maureen at 9:23 AM No comments:

Have you ever maintained a compost pile? 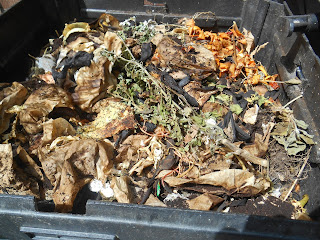 This is mine - a yucky looking mess of coffee grounds, filters, banana peels, apple peels, crushed eggshells, a branch the dogs broke off in their antics, discarded lettuce, carrot peels, and other such stuff that will decompose. The trick is keeping the wet/dry balance correct. If it is too wet, add newspaper, straw, or other dry materials. If it is too dry (which we deal with here in our arid climate), add more greenery or veggie materials. I go heavy on the coffee grounds and kitchen waste because they add a lot of good, wet matter. Any material that will decompose will eventually turn into compost. Could be years. If you want to speed up the process, a correct balance of wet/dry makes a big difference in the time the pile takes to decompose and become use-able compost. 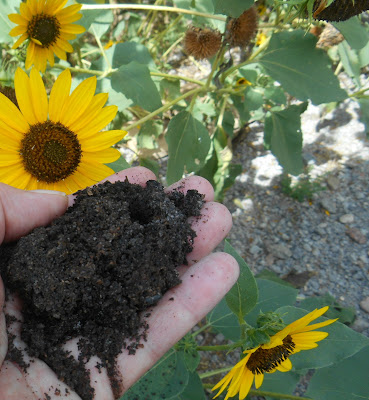 The result, over time, is this:
a rich, dark colored loamy soil to spread around plants as a mulch, or mix into the soil that will offer minerals and a healthy dose of food and encouragement the plants need.

There are different methods of keeping a compost pile. Mine is in a big plastic bin. Others use an open, fenced in enclosure, or make one out of old pallets. Some use several piles, at different stages of completion. As I keep one pile, adding to it every few days, I have to dig into the pile to get to the good stuff, and sometimes I need to screen out the in-process compost from the completed product.

It is really not complicated. You don't need fancy equipment or chemical additives or a compost starter. Compost will happen.

I loved reading this quote, from Diane Setterfield's The Thirteenth Tale. Her character, Vida Winter (an author), is speaking. Puts a thoughtful spin on compost.

"Life is compost.
You think that a strange thing to say, but it's true. All my life and all my experience, the events that have befallen me, the people I have known, all my memories, dreams, fantasies, everything I have ever read, all of that has been chucked onto the compost heap, where over time, it has rotted down to a dark, rich, organic mulch. The process of cellular breakdown makes it unrecognizable. Other people call it the imagination. I think of it as a compost heap. Every so often I take an idea, plant it in the compost, and wait. It feeds on that black stuff that used to be a life, takes its energy for its own. It germinates. Takes root. Produces shoots. And so on and so forth, until one fine day I have a story or a novel." 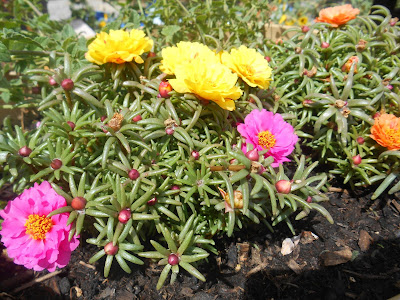 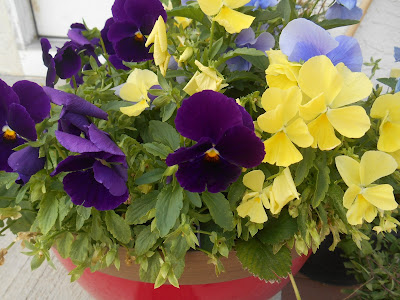 Posted by Maureen at 2:25 PM No comments:

No, I'm not headed off to Rome for a year. Anthony Doerr did, as part of a year-long artist fellowship he won. He, his wife and six month old twin boys traveled from their home in Idaho to an unknown apartment in an unknown city in an unknown culture speaking an unknown language (except the four hour crash course in Italian he took on a Saturday morning before they left). The journal he kept during that year became this book, Four Seasons in Rome.

The stories of their walk through the four seasons there, a few blocks from the Vatican, is subtitled, On Twins, Insomnia, and the Biggest Funeral in the World. Beyond recording the events, the adjustments, and the challenges, the book, for me, is a lesson in How-to-Journal. 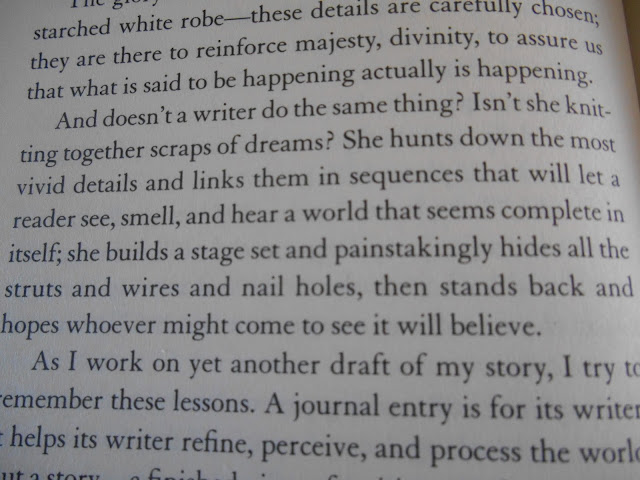 "A journal entry is for its writer; it helps its writer refine, perceive, and process the world."

The five senses are recorded throughout - a means he uses to process his memories, and a vibrant way for the reader to be involved in the scenes he records. Sights, smells, tastes, touch, and sounds - all carefully, thoughtfully woven through his words. Standing shoulder to shoulder with mourners as the pope dies, and later, pushing their double stroller through the crowd of celebrants as the new pope is chosen. Describing to a baker, the rich bread smells around them, the focaccia bread he wants to order, misunderstanding the frustration, realizing later he was asking, in his broken Italian, for grapefruit sauce. Discovering new foods, making new friends, listening to the language, learning to understand it. Hunting down those vivid details, linking them together to build a sequence of thought, to "stay alert to the miracles of the world." 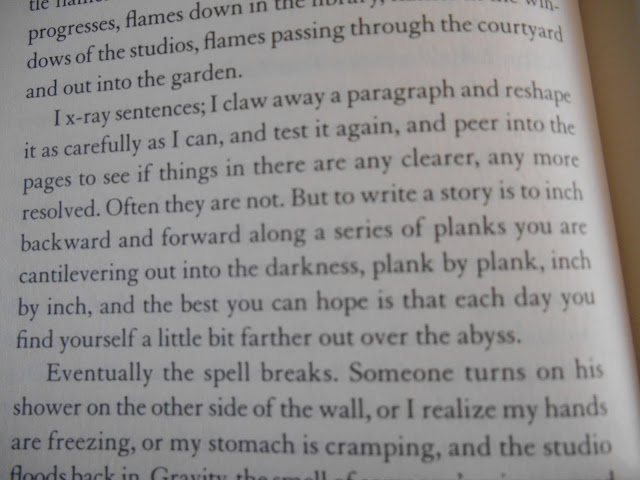 "A year is an infinity of perceptions: not just the shapes of starlings and the death of the pope and watching our sons learn to walk, but the smell of roasting meat in an alley, the dark brown eyes of a beggar on a church step, a single dandelion seed settling soundlessly onto the habit of a nun who is riding the train. This year has been composed of a trillion such moments; they flood the memory, spill over the edge of journal entries. What is it physicists tell us? Even in a finite volume, there are an infinite number of points."


In a way, this is discouraging. An infinite number of points? How could I ever catch them all? But that's not the point. Grab one. Grab two. Catch three. Record those vivid details, link together the sentences that help a reader (and me, the writer!) to see, smell, touch, taste and hear a world of beauty and miracles.


"There are a thousand thousand reasons to live this life, every one of them sufficient."


I think of Mary Oliver's poem,


"PAY ATTENTION
BE ASTONISHED
TELL ABOUT IT."

Keeping a journal has been important to me for years. I have a box of old journals stashed in a closet. Never for publication, but for me to thumb back through if I am looking for notes, or find when something happened, or just for browsing. This book, Four Seasons in Rome, is not only an interesting read of their year as a family, as an artist, as an author, as part of a community, but also of the way he perceived and responded to the world around him, brilliant at capturing those images, and how he stayed alert to the miracles of the world. Now, when I write in my journal, I pay attention - not just recording feelings (as in emotions), but capturing a moment in time, using the senses as a means of paying attention, and searching for the right words.

I tried to find a good example of how he incorporates the senses in his sentences. It is an overall impression he leaves. I would call his journals, Impressionistic Journaling. Like the impressionist painters that paint in various dots and smudges and blends of color, but leave a distinct image on the canvas, he paints images with his words that leave a distinct image. Powerful, beautiful writing.

"Everything is radiant. Distant trees toss, faraway walls gleam. The mountains at the horizon have switched on like streetlights, stark and defined, giving way to more distant ranges.
Then everything goes dark again, the clouds knitted together, the mountains sucked back into silhouette, Rome sinking into shadow."

Posted by Maureen at 2:09 PM No comments:

"This flag, which we honor and under which we serve, is the emblem of our unity, our power, our thought and purpose as a nation. It has no other character than that which we give it from generation to generation. The choices are ours." 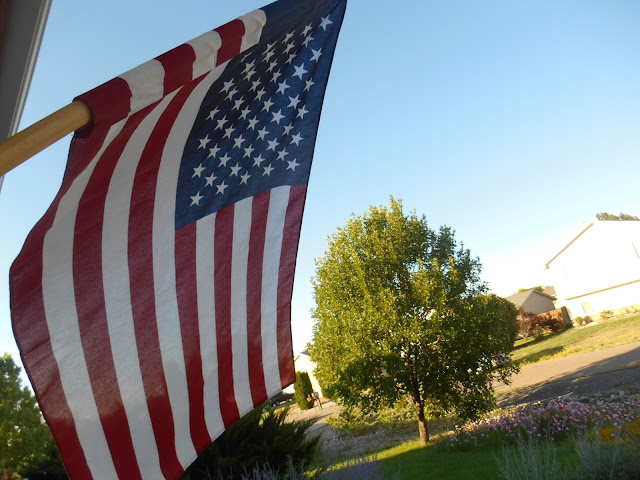 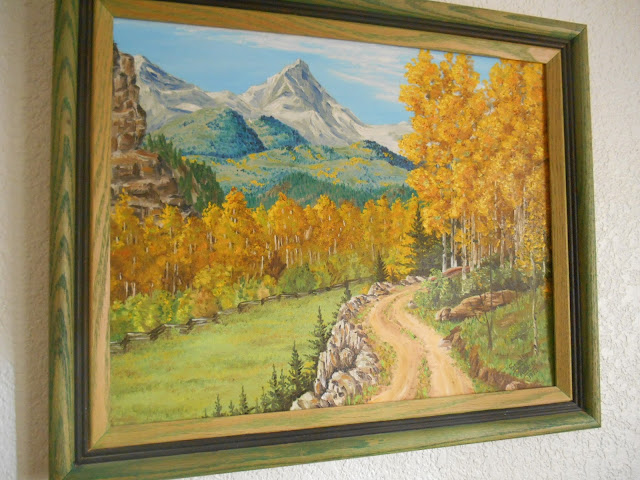 The Road Not Taken

"Two roads diverged in a yellow wood,
And sorry I could not travel both
And be one traveler, long I stood
And looked down one as far as I could
To where it bent in the undergrowth;Then took the other, as just as fair,
And having perhaps the better claim,
Because it was grassy and wanted wear;
Though as for that the passing there
Had worn them really about the same,And both that morning equally lay
In leaves no step had trodden black.
Oh, I kept the first for another day!
Yet knowing how way leads on to way,
I doubted if I should ever come back.I shall be telling this with a sigh
Somewhere ages and ages hence:
Two roads diverged in a wood, and I—
I took the one less traveled by,
And that has made all the difference."

This poem, by Robert Frost, is a favorite. I have probably quoted it here, before.
We found this painting at a thrift store, and "had" to add it to our collection of mountain paintings, destined for our cabin walls once they are finished, beyond the stud stage.

Since the time change, I have noticed new lighting patterns, the shift of the sun's position and the timing of the sun glow across the walls and floors. Right now, the evening sun shafts across this road, framing it in gold, making what is around that corner almost visible. 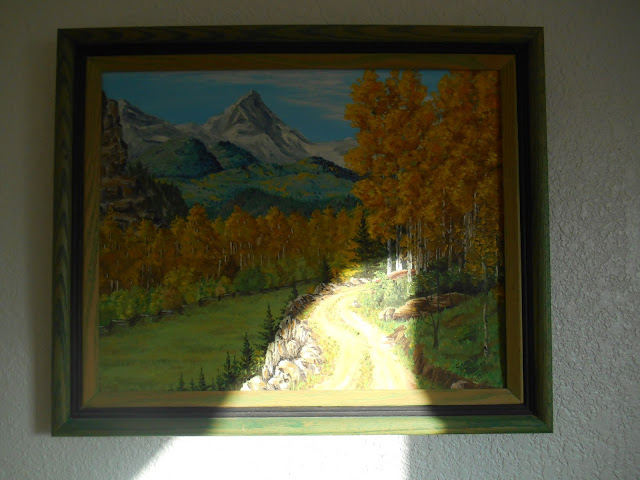 Our cabin in the mountains could be right around that corner, the road, its invitation to come and stroll, to welcome the quiet, or hear the wind waves through the trees. 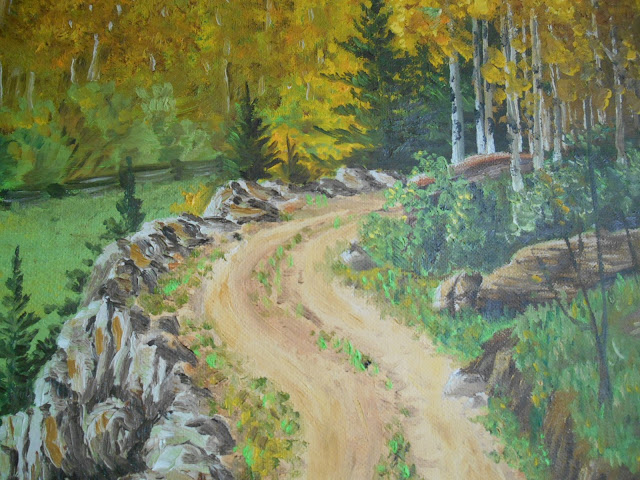 Signed Stanley Awbrey, 1973, it could have been painted on the road we take, the road to our cabin, one autumn day. I imagine a few deer strolled by while he sat and painted, a chipmunk paused a moment to watch, and blue jays chattered overhead at his plen-air intrusion into their quiet world. I have no idea who Stanley Awbrey is, or where he is now, or what he was like, but I am grateful he took the time to create this moment, preserved in time, for us to enjoy years later.

If I could be like Edmund and Lucy and Eustace and jump into a picture, this would be it. Oh, wait. We do jump into this painting when we go to the mountains, creating our place, there. This reminds me what a privilege that is, and I am grateful.
Posted by Maureen at 6:47 PM 3 comments:

Maureen
Traveling lighter is an on-going process, learning to live lightly - for me, this means simplifying, nutrition and exercise, and learning to appreciate and be grateful for the little things each day. I will post short stories I write, and occasional random thoughts with photos. Will you join me, to connect and build a bridge of words?